CO-WC spoke with the owners of the cozy neighborhood café Café Goldfries, Monique Schneider and Rainer Dietzel. Today it is home to Café 60 Grad, with the CO-WC sign on the WC door.

Monique: We are here because we like to bake. And we wanted to run a café together, of course. Rainer and I ran a kindergarten for 11 years. We worked well together and then we thought, “let ́s start something new.” We took some baking classes and baked for a hobby. Now, we are here and do it for our guests.

Rainer: While looking for places, we saw a place with a horrendous premium to be paid. One place looked like totally abandoned, furnished with a full of garbage. Then we spotted this place by chance. We had a closer look into the advertisement, and it turned out that there is a basement connected to the cafe. That could be our kitchen. We decided to combine our antique taste with a modern setting. Actually, there was already a café before us. That looked somewhat serious and cold.

Monique: Café Goldfries is furnished with very simple things, with many elegant tables and wonderful dishes from a friend, and so on. These are findings.

Rainer: Friends of us used to own a cafe. When they closed, we got their chairs, for example.

CO-WC: You’ve gathered all things together.

Monique: Some were in place already. The counter, the floor and the bathroom, for instance.

CO-WC: When I entered Café Goldfries, it was like being in a “real” café. The atmosphere is very cozy and everything is beautifully decorated. What does the name Café Goldfries mean?

„Goldfries is made up of Gold and Fries.“

Monique: Goldfries is made up of “Gold” and “Fries.” We picked up „Fries“ from Friesenstr, where we now stand, the street named after Friedrich Friesen. And „Gold“ has something to do with our own style: we use gold rim plates and silver cutlery. In our house, such style is reborn in a modern way.

Rainer: Fries(frieze) also implies a border, a fringe. In fact, here you’ll find golden rims on the pillars or around the plates. It’s like a golden border, a golden edge. So there is also a connection between Friesenstr. and gold friezes.

CO-WC: There is a nice story on your website about Mr. Friesen. Can you tell us more about it…?

Rainer: I think most of it is a pack of lies (Laughing)

Monique: You can say it’s a wanton imagination of a literary friend.

CO-WC: You amplify Mr. Friesen story. Let’s just say, Friesen lived from 1784 to 1814. He was a freedom fighter, educator and co-founder of German gymnastics. What else and what exactly, everyone can figure it out by oneself.

CO-WC: Café Goldfries is a beautiful meeting point. Who are your guests in fact?

Monique: Most of our guests are regular customers. I still remember our very first guest, a teenager whom we now know quite well. As the door opened, we were told: „Oh Goldfries, I assume that you sell fries.“ We did not expect that. But looking back, it was understandable. Of course I said “no, not fries…“ (laughs).

Rainer: Some of our customers live in the new blocks. On the weekends, Tempelhofer Feld(Ex-Tempelhof airport) visitors come over. Columbiahalle and the Columbia Theater crowds stop by as well. Sometimes, they wait from morning to night for concerts and we have the only toilet available in this area.

Monique: It is crazy at times. In the beginning, I really thought we should close the café and only run the toilet. But normally, it’s more like a neighborhood business. We keep their packets, call mums when children come saying they forget their keys, and so on…

CO-WC: You have different guests around the clock.

„All kinds of people of all ages come to Café Goldfries.“

Monique: All kinds of people of all ages come to Café Goldfries. We have old folks, young families, musicians, students, concertgoers, workers in the lunch break, kids coming after school and so on. For kids, we have a special offer. They can collect cinnamon roll stamps. And they love to come penniless and pick it up.

CO-WC: Here we go with your specialities…

Rainer: A regular customer made it for us out of ceramics.

CO-WC: I heard your biscuit in a mug is also famous.

Monique: It’s made with our family recipe. My grandma passed it onto my mom and my mom to me. People love it as well.

CO-WC: You obviously run your cafe with passion…

CO-WC: Let’s talk about restrooms and signs. Gender-neutral bathroom has made its way and become a global trend now. But what we see on the door is still an old man/woman pictogram. You also have this so far. What is the reason for it?

Monique: Well, it was already hanging on the door.

Rainer: A man/woman pictogram was clear in a way.

CO-WC: That is the point. Traditional pictograms seem the most ‘natural’ thing in the world. It’s just that we are very used to them. In other words, we overlook the cultural product and simply take it.

Monique: Gender roles are already clearly defined in books for children. Boys do that, girls should not do that and so on.

Rainer: You might say that. We were kind of okay with a man/woman pictogram and took it as a matter of course.

CO-WC: There is an award called “Der Goldene Zaunpfahl.” It’s a sarcastic award for absurd gender marketings. We all know products such as Kinder Surprise Eggs in pink.

Monique: Regarding your sign, I think it’s a good idea that you work with pink and blue, the colors of gender stereotyping.

„To raise awareness, I like the idea. And I am against any kind of dogmas.“

CO-WC: Our goal is to make an old way of thinking open and questionable. We want to show with our sign that man/woman pictograms are based on certain stereotypes. They are not something natural but culturally- made products. And the same goes for the colors.

Monique: To raise awareness, I like the idea. And I am against any kind of dogmas.

CO-WC: With WC signs, we see two large trends ongoing worldwide: Either we stick to the old pictograms or we replace them with letterings such as “All-Gender Restroom”. In our opinion, we cannot easily slip out of the binary gender system. Nor can we simply ignore the global WC-culture. Yet, we can play with old signs and make people aware of its meaning. CO-WC sign triggers confusion and questions the given roles of individual and culture.

CO-WC: You don’t have gender-segregated bathrooms. Any difficulties?

Monique: We just have one toilet for everybody.

Rainer: There’s no other choices. That’s it.

CO-WC: So there is no big deal to share a bathroom with others.

Monique: If there is a long queue in front of women’s restroom, I’d just use men’s. It‘ mostly available. It might be relatively easier for women to use men’s restroom. Well, it can be something else when men walk into women’s bathroom…

„But how do we make multi-user restrooms into all-gender one?“

Rainer: Our cafe is fine since we have only one bathroom. But how do we make multi-user restrooms into all-gender one? What if there are urinals and toilet seats mixed in one restroom? I think it’s good to add more information to each toilet according to its purpose. So anyone can enter one without facing unpleasant situations.

Monique: It suits us because we have only one bathroom for everyone. I like it that way. It is simple and

CO-WC: We don’t want to tear off old toilet signs by force. Our aim is to attract and invite people to willingly use all-gender restrooms. Man/woman pictograms are omnipresent worldwide. If old signs are deeply rooted in our culture, let’s just at least question ourselves and be confused for a while. More we do this, better we understand a difference. Our goal is more openness, diversity and respect.

Monique and Rainer, many thanks! 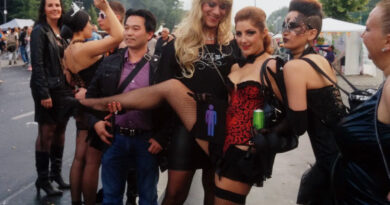 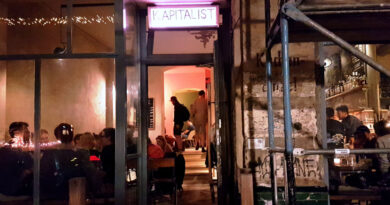